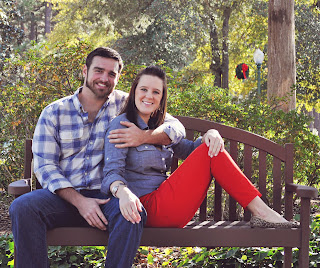 Where did you meet?
Cody and I met in January of 2011, my last semester of college at the local college bar. The semester before we had a class together, and Cody never had the courage to introduce himself before then!

How did he propose?
Lee Brice sings a song called “Woman Like You”. It describes what he would be doing if he had never met the woman in the song, but in the end he basically says that he’d trade all of it to be with her. When Cody heard this song, he said that it reminded him of our relationship. Later, while living in Myrtle Beach, Lee Brice had a concert at the House of Blues. Cody surprised me with tickets to the show and when “our” song was almost over; he got down on his knee and proposed!

Where do you reside now?
Greenville, SC

Interesting things about our wedding day?
Cigar roller? Is that interesting?

A cigar roller is most certainly interesting! We're so excited for your big day, right around the corner!
XO
The MGE Team

Email ThisBlogThis!Share to TwitterShare to FacebookShare to Pinterest
Posted by The Savannah Wedding Planner