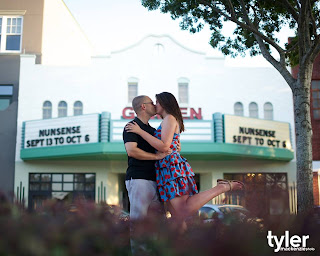 Where did you meet?
In 2003, Greg Wilson, an attorney, hired Amy as his receptionist. Later that year, Phil Calandrino (Amy's now fiance) moved into the office building. Phil and Amy's casual conversations eventually led to their first date - a homemade Italian dinner and movie night. They had a second, third, and many more dates before becoming best friends and falling in love. They live in Dr. Phillips (near Universal Studios in Orlando) together with their three rescue kitties - Binky, Rambo and Tutu.

How did he propose?
Over the years, one of Phil and Amy's favorite vacation spots grew to be Savannah. Phil said it'd be a great idea to go there for Amy's birthday. Nathan and Michelle Buckland as well as Laura Milham all joined - oblivious to Phil's motives (Laura and Michelle are two of Amy's best friends). As they all enjoyed the sights and food, Phil carried the ring in his pocket waiting for the opportunity to propose in front of the Forsyth Park fountain. After a "birthday" dinner at the Olde Pink House, they all took a taxi to Forsyth Park. Amy ran ahead to the fountain. With the necessary buffer, Phil told Laura what was about to happen. She coordinated with Michele and Nathan to take pictures and video of the engagement. Phil and Amy stood in front of the fountain for a birthday video, where he asked for her hand in marriage. She squealed YES with glee.

Why did you pick Savannah to get married in?
Some people are beach people. We are Savannah folk. We have known for years that we were going to be married in Savannah so it was perfect that Phil proposed in Savannah.

Anything interesting or out of the ordinary about your wedding day?
We are having a ghost pub crawl after the reception dinner in lieu of dancing.

Anything else you would like to add?
We will be together 10 years on October 8, 2013. Phil's parents are celebrating their 50 year anniversary on November 9, 2013. Phil and Amy have a lot of the same hobbies, including wine, cigars, and golfing. They are in the process of planning their honeymoon which will be a golf/wine trip up the Pacific Coast Highway with lots of time in San Francisco and Wine Country.


A ghost pub crawl instead of dancing - that's how you know it's real love! Can't wait for your big day!

Email ThisBlogThis!Share to TwitterShare to FacebookShare to Pinterest
Posted by The Savannah Wedding Planner