with Kate and Jamey…… 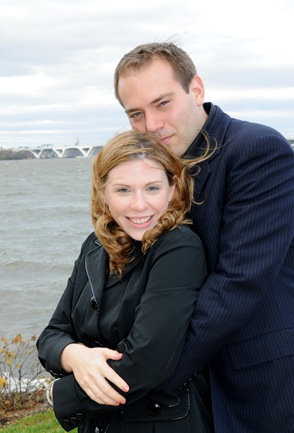 On May of 2007 Jamey and Kate met each other after a softball game in their local pub "Stoney's." They both lived only a few blocks away from each other. Easily they started up a conversation that night that continues today. Actually, Jamey was on a date the night they first met. Needless to say, after he met Kate he was smitten. At this point they were only friends.

However, they felt so at ease with one another, this was not to last for long. They both valued their personal relationships with family and friends and wanted to find someone who shared in those beliefs too.

On a Wednesday night in late July of 2007 it was Kate who boldly took the next step. She asked Jamey after a work happy hour why he had never asked her out before. A little shocked at her directness he recovered smoothly and successfully asked her out that night. The following Saturday they took a trip to Annapolis, Maryland for their first date. It was a successful first date!

On May 15, 2008 Jamey called Kate’s mother, Madge on her 60th birthday to first wish her a happy birthday and second ask her for her daughter hand in marriage. For weeks Jamey and Kate’s sister Megan had collaborated together to fool Kate into thinking that Jamey won a raffle ticket to The Homestead resort in Virginia. On May 16th Jamey picked Kate up after work and they both set out on their weekend get away to the Homestead.

We chose Savannah, GA because Jamey is from the state of Georgia. I think Georgia is so beautiful. I wanted my family to have a chance to see it. Our wedding gave them a perfect excuse to visit the State. We both are huge history buffs too and love the idea of being married in one of the oldest cities in America.

(Jamey's email to family telling them about his decision to ask kate to marry him.)

I just wanted to inform you that I am taking a huge step forward this weekend and am proposing to her. Most of you know by now that, Kate is the love of my life and has become the partner in crime I always dreamed of and the closest friend I have ever had. To some, it may seem as if after 10 months this is a bit quick, but Kate and I came into our relationship with a profound understanding of what we wanted out of life and with our spouse, since we met after a tough time for both of us and after some serious and long needed soul searching. I am not sure how to explain it exactly, but it just feels 100% right. I can't see myself with anyone else.

She is aware the proposal is in the works as had to help me with ring sizing and such since she generally is not a jewelry person. But the when, where, and how have been a closely guarded state secret. I am very excited and let the news leak to a few of you in recent days, while away participating in a friends wedding in Key West (Matthew and Yolanda Sheffield). I am taking Kate away on a weekend get away to The Homestead in VA for what she thinks is a trip, " I won from a charity raffle," in large part due to help from her sister Megan who has been an excellent co-conspirator in this process.

I know everyone has lots of question and advice. I plan to ask her at dinner during dessert on Saturday night, so please hold the phone calls; I really won't take them until Sunday. Since I do not have everyone who should know email's you can inform them of the exciting news.

I love these guys! It has been so fun planning with them…and you can see from this…just why I feel this way!  Not to mention they love to say “Morgan, we trust your judgment, just do what you think looks and is best.”(Every planners dream)  It is going to be an amazing day under large oaks, in the gardens of a beautiful mansion, awesome food and filled with love.