with Angel and Scott….. 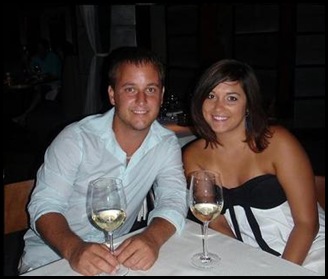 I am originally from Macon, GA and I lived there all of my life until I went to college in Athens at UGA. Go Dawgs!! In my last semester at UGA, I accepted a job as a sales associate with Coca Cola North America. I graduated in December 2005, and I found out two days before graduation that they were moving me to ARIZONA!! I had never been west of the Mississippi River! I never hesitated and looked upon this journey as a new, exciting adventure. I knew that I would learn so much about life, people, and myself. It was definitely a shock going from knowing everyone around you to not knowing a soul. I quickly made friends and began on my journey of exploring a new part of the country and myself. One friend in particular was a co-worker that introduced me to some of his friends. Luckily for me, one of those friends was Scott. We always had so much fun hanging out and picking on each other and quickly became good friends. After about two years of living in Arizona, I was ready to move back to the South. I decided I wanted to move to Charleston to be closer to my family and friends. When Scott found out he discretely made a comment that he was sad to hear the news that I was leaving, and for the first time I realized there might be something more there than just friends. He says he gave me plenty of other hints, but I just did not realize. J In June 2007, everything changed when my co-worker’s (that introduced Scott and I) fiancé was in a terrible boating accident that left her in the ICU for months. She owned her own business, so my plans of moving to Charleston quickly changed when I decided to run her business to keep it going while she was in the hospital. While spending every available hour in the hospital waiting room, Scott and I grew closer and closer while dealing with this catastrophe. We began dating July 28, 2007, and we fall in love with each other more and more everyday!

On our one year anniversary, Scott and I went to dinner at a really nice restaurant that has wonderful views of Camelback Mountain (a beautiful historic mountain in Scottsdale, AZ). We had already had a wonderful weekend getting massages at a resort and spending time relaxing by the pool. I did not expect anything that day because Scott was being so calm. We had a wonderful dinner and our server asked if we had ever been to the top of Camelback Mountain to see the view of the surrounding cities. I said, “No,” and Scott said we should go up there. We started driving, and I was getting nervous because the road was steep and winding. I kept telling Scott we needed to turn around because it was getting dark and we did not know where we were going. He, having plans of his own, did not listen to me and to my surprise we made it to the top. The view was gorgeous! The stars looked like you could reach out and touch them and you could see all of the beautiful, fancy houses down below. Scott and I were walking around and talking about our last year together and how much we loved each other. I still had no idea because Scott normally is very sweet and romantic, so his outburst of love and emotion was nothing new. All of a sudden Scott got down on one knee and said, “Angel Michelle Watson, will you marry me?”! It was the best question I have ever been asked, and now I get to marry the man of my dreams in the city of my dreams!!

I have dreamed of getting married in Forsyth Park for as long as I can remember! My parents were engaged in Savannah, so the city has always held a special place in my heart. I love the charm and history that the city offers.

Macon, GA; I accepted a job with Warner Robins Air Force base and moved back to Georgia in March 2009. Scott and I had a long distance relationship until June 2009, when he finally got to move to Macon to be with me. It was the longest three months imaginable!

Since Scott is originally from Illinois, I am from Georgia, and we lived in Arizona, we have many guests that will be traveling to Savannah for the first time. Savannah holds such a dear place in my heart that I would like everyone to leave in love with the city like I am.

We are so happy for you both! Here is to the two of you and your special day!