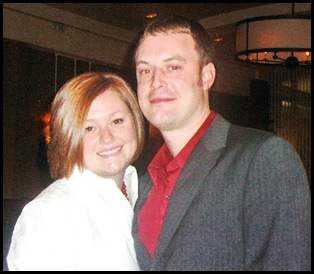 We are from a small town called Plain City...I have known Justin since Kindergarten.

It was one of those random days in December that the weather was actually nice enough to go on a walk.  We live right down the road from Huntington Beach and we decided to check and see how the lake looked during the winter.  So we were walking along the beach and just chatting about the white caps on the lake and how its unusual to not see any big ships.  We were walking along the pier and still just enjoying the view and he said that he had a question to ask me and I didn't think anything of it. Next thing that I knew...I was looking at him on his knee asking me to marry him.  I was completely surprised because we had been together for eight years at the time and had always talked about it, but nothing ever happened until that day.

Ever since Justin's Grandparents, Aunt and Uncle have moved down to Georgia, we go and visit about every other year.  The very first year we went down to visit, we went to Savannah and we both just fell in love with it.  I think we even mentioned while we were down visiting that we could see ourselves getting married there someday.

We bought a home in North Olmsted, Ohio two years ago.

Although we are not ordinary people...nothing at our wedding will be out of the ordinary.  Just maybe not such a traditional affair.  I don't think that Justin would allow me to have our "fat little sausage," Fiona, as my flower girl.  Plus, considering she is a Pug, I really don't think she could handle the heat down in Savannah.