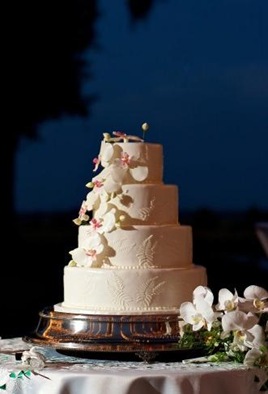 I figured cake tasting would be one of the easier vendors for me to handle, after all I love cake and I have made a few. But as life should have it, it sure showed me how wrong I could be even from the start!

My first task was trying to figure out what kind of design would go with the vintage garden theme of our wedding, not to mention finding one Joey and I agreed on. This was definitely one place Joey was overenthusiastic about being a part of. It is cake we are talking about, and what man doesn’t like cake! Joey and I sat down for days looking online for cake ideas. The MG Events team was even emailing us ideas that they had come across that they felt would fit our theme and personalities. Between the three of us, we came up with two cakes. And let me say two VERY different cakes they were. One design came from the art deco period and the other was delicate and soft with lace, but Joey and I couldn’t decide.

So the day came, when Morgan set up our first appointment. Joey couldn’t make it up for the first tasting, but Morgan had arranged with Carrie of Two Cakes for me to take samples back for him to try when he got into town. He was very excited about this, and it allowed for us both to have input on our cake decision. Morgan took me to her studio meeting space where we began to look Carrie’s previous cakes, which allowed me to get an idea of what she could do and how well she could do it! Morgan had previously emailed her our two ideas, so she sat and talked to me and Morgan a bit about what I was looking for and the style of our wedding. Morgan even had pictures of my wedding dress and vases we were using to help give her the feel of the wedding. From there we narrowed it down to the cake with lace piping on it. Carrie made a sketch of it and any changes we wanted or talked about, such as the colors or the piping on certain layers. She even wanted to change the sugar flowers on the cake to flowers that were going to be in my bouquet and all over the reception. I followed Morgan’s advice and let the experts make suggestions, after all, it is what they do best and often their suggestions only make it better. They know what works and what doesn’t. For example, we had to discuss if the cake was going to have butter cream or fondant on the outside. This mattered because we are having our wedding during the summer, but it was going to be kept inside with air conditioning. I have to say that it was nice having three people there and having it inside of a private business rental. It allowed me to really get to know Carrie, bounce ideas off of each other, and talk freely. After the look of the cake had been set, Morgan and I dove into the cake and icing flavors. Wow, there were so many flavors and combinations. That’s what makes it difficult, Carrie makes the samples with what is most popular and sometimes you have to just try the icing or just try the cake, or make up your own combinations. Thankfully Morgan was there to offer her expertise, too! Carrie really added an extra touch, by giving us a huge sample plate for Joey and then drew a labeled guide to go with it, so he would know what he was eating. Sometimes it really is the little things that people do, that make the difference.

The next cake appointment Morgan set up was at Gallery Espresso. The process was very similar, as the first, except this time I knew which cake we wanted and we brought a few more members of my family. Along with the MG Events team, my mom, dad, step mom, my fiancé Joey and I were all there. Since it was at a café it made it a little more difficult to exchange ideas or discuss details, especially when it was a busy weekend day and six were in our party. Sometimes when more people are there, more options and suggestions can go around, and although this can be a great thing (like two heads are better than one), occasionally it can make it overwhelming and difficult. I don’t think Joey and I were heard as much, or were able to connect the same way I did with first baker. This baker was so sweet to accommodate all of us, and her cake was absolutely delicious, especially her red velvet cake. It was the most popular, including mine!

Joey and I had a difficult choice ahead of us, and we knew it. We liked different things about each person and their cakes. But in the end we decided to go with Carrie of Two Cakes, with two separate flavors: Strawberry and a marble of Chocolate…but you will have to wait until the wedding to see what design we came up with!

Your fellow bride in planning,

Love the cake design, thank you for sharing!