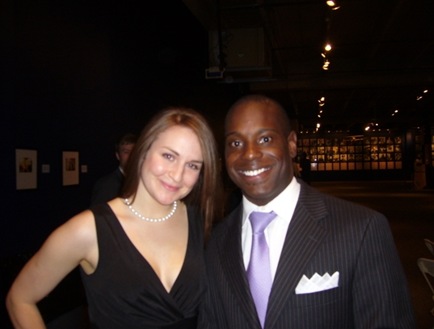 The University of Oklahoma College of Law.  Dre' was a 2L mentor for Mary's 1L law class.

Short version *smile*:  Mary and Dre' were on their way to Tishomingo, Oklahoma for a family weekend.  Dre' told Mary that he had to drop off some bar outlines for a friend of theirs so they were going to make a short detour to the law school.  Mary's birthday was two days before; Dre' told her that he had a card he wanted her to read.  Inside the card was a poem.  As she read the poem they pulled up to the front of law school and in the last line, Dre' asked Mary to be his wife.

Dre' is from South Carolina and we wanted to be close enough for his family to drive easily.  We also wanted be in a place that would be enjoyable for out-of-town guests to visit.  As a couple, we are very laid back and easy going.  Savannah was a great fit all around.

Dre' lives in Oklahoma City, Oklahoma and Mary lives in Amarillo, Texas. In September, Mary will be moving to Dallas, Dre' soon to follow.

We know this day is going to be unlike any! We are very much looking forward to creating the wedding of your dreams at the Ford Plantation!

Are my answers direct and to the point or what?!?! Haha! I must have been in lawyer mode.

I wanted to add that the man in the picture above is one of the most amazing men on the face of the earth. He is kind and honorable and patient, funny, smart, and strong. The list could go on but it would get incredibly long and sappy, so I'll leave it at that. *smile* The point is - I am blessed to have him in my life.

Morgan, we are so excited about our wedding at The Ford Plantation and about planning it with you!