How to wear white as a wedding guest. 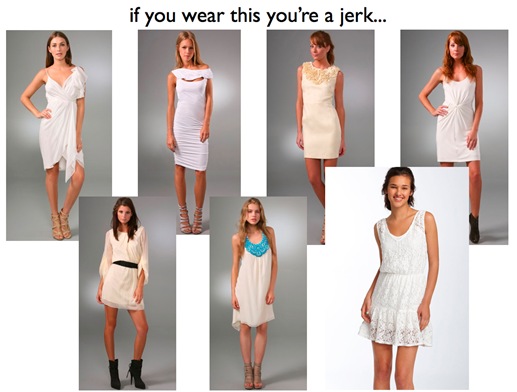 Okay, so this should be painfully obvious. DON’T FREAKING DO IT! I mean come on, there is nothing more you can do short of throwing red paint on the bride to say, “Look at me, I am more important than you!!” It’s even worse if you are related to the bride. Come on. You are just a jerk if you think this won’t offend the bride. I am not making this up. My mother-in-law, who I love, had bought a perfectly beautiful coppery-brown dress, it was so cute. A few weeks before the wedding she asked if it would be okay if she wore cream... What was I supposed to say? What I was thinking? That would have proved to be a disaster. I calmly told her that I loved the dress that she already had chosen, truth, but that if she wanted to wear cream she could, lie. She wore the brown, thank you very much. The truth is, wearing clothing accented with white is not a major crime, it’s the full blown white dresses or even a stark white top that may be too much. I would say it’s appropriate if it’s 30% or less white. And note, that even if it’s baby pink or creme... if it resembles white... in the br   ides eyes... it’s white!!! It does vary from bride to bride, but it’s generally better to be safe than sorry. Have you seen Bridezillas? I wouldn’t want any of those honeys mad at me!!!! If you are extremely close to the bride, ask her and if you are nervous about asking her then don’t wear the offending white clothing. Got it!? My mom called me and told me she found a beautiful dress with creamy/white accents at the bodice. She sent me a picture and asked if it was ok. I said, of course. She looked beautiful and totally didn’t appear to be stealing my thunder... Although, my mom is smoking hot... Basically, the idea of wearing white to a wedding isn’t a new rule. Everyone knows this. So by wearing white you are saying more than “I look pretty” you are saying, “I’m a big fat jerk who constantly wants attention and don’t care who I hurt getting it.” So ladies, be tasteful. Don't be a big fat jerk. 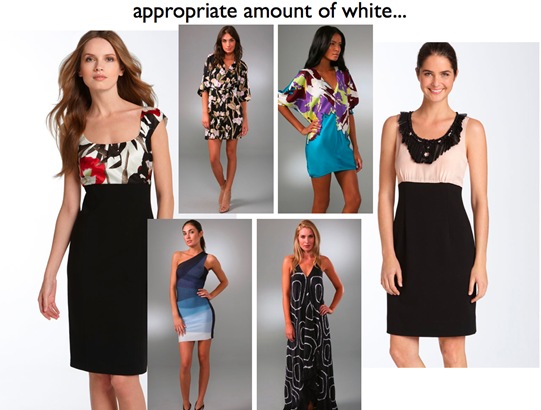 Now beware cultural rules, Filipino women wear white to weddings. It’s a traditional dress... Now when this happens you can’t do much about it. Get over it. It’s not about you. As a bride, don’t be a super spaz. What I mean is, don’t let someone wearing white ruin your day! You are tougher than that, don’t be an annoying bride. Acknowledge... calmly... that the person in white is a major loser and move on. It’s totally not worth it to get upset. Just politely ask the photographer to leave that loser out of all of your photos ;)

Until we meet again, stay bridal and here’s to hoping that you are the only one in white on your big day.