with Victoria and David 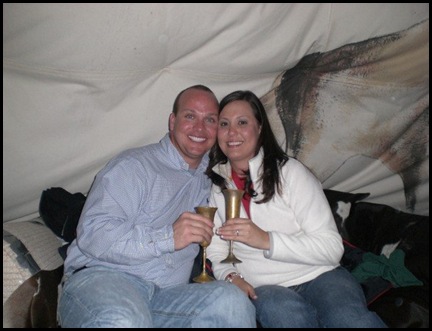 I met David a few times through my best friend but we finally struck a conversation at one of her softball games. He was supervising and we were the only two watching the game so we started to talk. We laughed and after a couple of games he asked me on a date. Now we are getting married after 6 years of dating!!

He planned a dinner outing. We were in Colorado, which is what I thought was my birthday present and on my birthday night we went on a sleigh ride on a small ranch. They had small teepees there which was full of artifacts and such. The sleigh ride stopped at one of the teepees and we went inside. The owners left the room so I got up to go look around. David then started in on his proposal but at the time was like "yeah yeah that nice move so I can see". He finally gave up on the whole spill and went down on his knee and proposed! All I could do is cry. It was definitely unexpected but by far the best proposal!

We picked Savannah because all the destination weddings we tried to plan was way more than we bargained for. So we decided to stay close to home.

Our cake will feature a snow cap mountain look.