Tattoos. To cover or not to Cover.

I know how I feel on this subject, but I thought I would reach out to my facebook compadres to see if the general public felt the same. So perhaps I surround myself with friends like me, but it seems that most rule in favor of “not” covering up. I know it can be a touchy subject. Perhaps it’s mom or dad who is requiring the cover up or maybe it’s something you don’t want to share with the in-laws just yet. Surprise! 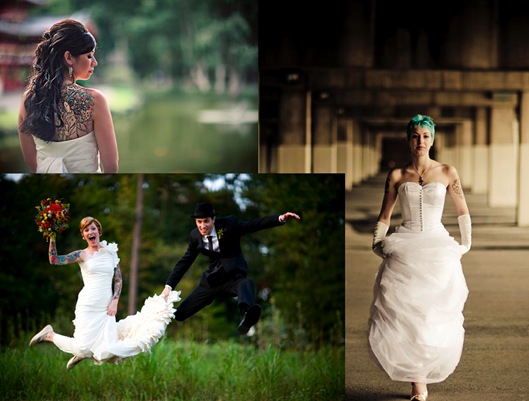 My personal take is do exactly what YOU want because you are the one looking at the photos for the rest of time.  I love my tattoos and nothing in the world would’ve made me cover them up. I have more now then I did then, but I wouldn’t cover them either! My facebook buddies mostly all agreed saying, “Why would you have them in the first place if you’re just gonna cover them?” and “Personally I’m letting aaallll mine show...well the ones I can show anyway.” One friend, who I wouldn’t expect this from, said she is going to get a tattoo on her beack before she’s married saying, “if I have to change my awesome last name(King), I get a crown on my back to keep a part of it.” It’s going to be her last single act! I love it.

I only had one buddy chime up in favor of covering. Saying that while she loved her tattoos her vision of a bride is “simple, pure, classic kind of look... and tattoos aren’t really in the picture for me.” I once had a friend tell me that she would cover up at any formal event where all eyes were on her because her tattoos weren’t for other people, they were for her only. I dig it. And I can totally understand covering a tat that you hate or plan to remove. Brands like Dermablend make ah-mazing coverups for tats. But the best advice I can give is to pay someone to airbrush them away. It may be expensive and time consuming, but it will look the most natural and it will stay put ALL day! 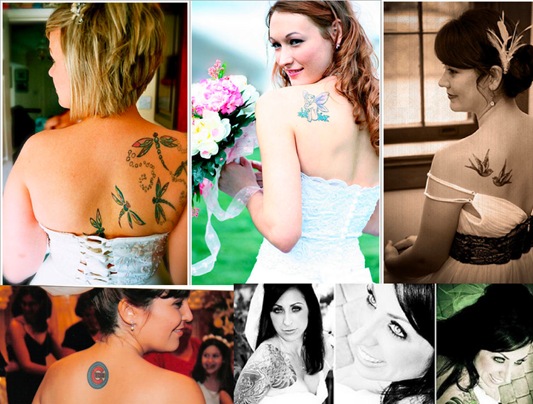 Another friend sent me a like to the Offbeat Bride site. It’s a great site for anyone who is looking to do anything a bit different at your wedding. It’s full of spunky brides and rad ideas. 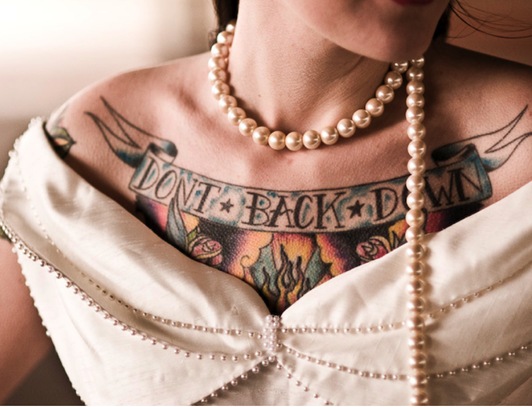 Until we meet again, stay bridal and let your body art shine!!!