And the contest proposal winner is…..

It was sooooo close between three couples but Kelaine and Paul won by about 20 votes! Thank you to all our contestants and we will contact the runner up as soon as we hear from Kelanie and Paul. 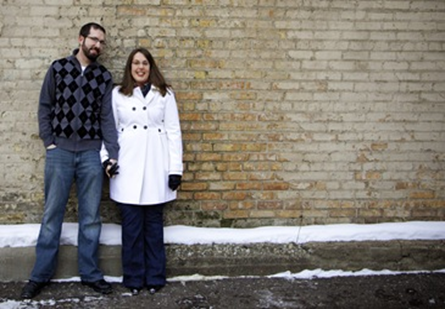 Paul and I had been dating for 3+ years. This summer, I knew that marriage was on the horizon and that a proposal was in the near future, but I had no idea how Paul was going to do it! We go to the MN State Fair every year, and 2009 was no different. The first year we went to the fair, we had only been dating a few weeks and I wanted to ride the ferris wheel, Paul agreed. When he started turning white and shaking, I realized that he was trying to be "cool", but was actually terrified of heights! He was too smooth to tell me he was afraid then, but for some reason he agrees to ride it every year with me. :) On August 29th, 2009, when the ferris wheel stopped while we were at the top...Paul, with his eyes closed, asked me to get a box out of his pocket, which was my ring. I started laughing and crying at the same time, he was so afraid of being up so high that he never opened his eyes. He said a lot of really mushy stuff about me making him the happiest man in the world, and finally got the nerve to get the ring out of the box and put it on my finger. Telling this story makes me smile every time. The fact that we were with thousands of people, but alone at the same time was great. It was such an intimate proposal and super fun. I will always have fond memories of the State Fair.

Congratulations Paul and Kelaine! Kudos to Paul for being so creative!

Send me an email and we will get you squared away with your fabulous prize!