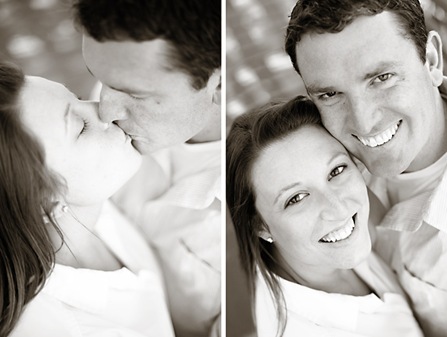 We met online on eHarmony in April 2007.
I signed up as a dare from a co-worker who had met her fiance (now husband) on eHarmony. I only thought "weirdos" used online dating, but Ryan was my 3rd match and we both knew we were meant for each other after he set the menu on fire during our first date :)

Ryan proposed to me at a Penn State football game. Most girls would think "ew", but it was the perfect place. Every year my family and close friends meet at Penn State for a game- my parents, me and all our close friends are all Penn State alums. It was Ryan's first year attending. He asked my dad for my hand during the tailgate before the game.
When I was giving Ryan a tour of Beaver Stadium during the 3rd quarter, we kept trying to get a good picture of Mt. Nittany and all the tailgates surrounding the stadium from the upper level. We're both big armature photographers, and Ryan asked for me to get a new camera lens out of our camera bag. The box I pulled out was much too small for a lens.... but the perfect size for an engagement ring! :)
Even though we were right next to a garbage can and only feet away from a concession stand, Ryan dropped to one knee and asked me to marry him- to which I shrieked "YES!!".
(O yeah, Penn State won the game, too :))

Pure chance and good pics on the internet.
Being from the northeast originally, Ryan and I have friends and family spread all across the country. We were looking for a romantic wedding location that could someday mean something to the two of us. One day one of my closest friends mentioned her recent trip to Savannah, and I fell in love with her pictures of the fountain in Forsyth Park. And that was it!! 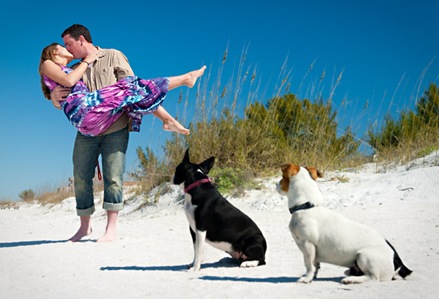 I'd love to have our two dogs in the wedding, but everyone's told me "NO!".

Kristin and Ryan, I am so thrilled to be planning your wedding with you and cannot wait to share in your wedding! PS I love your puppies and I would have said lets go for it!