How to establish a budget and find out who is paying for what!

Last week I wrote a blog on a question that a bride asked about “Why have do I have a budget established and why Planners ask for a wedding budget” and today I want to share with you a great article that the Knot on wrote on the different options of who foots the bill and the pros and cons to each. Read below! 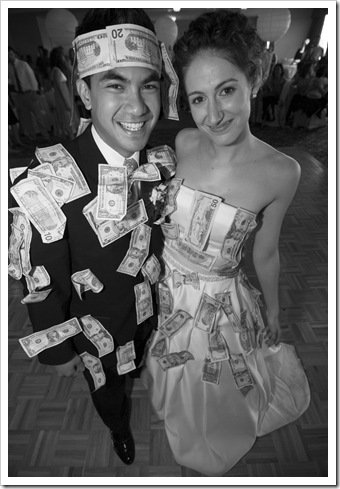 The traditional -- and still pretty popular -- way of paying for the wedding.If everyone is contributing, pool all the money upfront and then see what your bottom line is. It's much easier than saying "mom takes care of the gown, the flowers and the band" we take care of the rest.

The Pros:
You don't have to dip into your nest egg to pay for the wedding, which means you'll probably be driving a better car, buying a better house and taking better vacations a year from now than your contemporaries who are paying -- in full or partially -- for their own wedding.

The Cons:
"The person who pays ultimately gets what he or she wants," says JoAnn Gregoli, a wedding consultant and owner of Elegant Occasions in Denville, New Jersey. Which means that if you want 100 guests but your parents want 250, you'll probably end up with at least 175 to 200 people at your wedding. "Having your parents pay for the wedding doesn't hurt your wallet," notes Gregoli, "but you have to be willing to compromise on what the wedding will be like." Another downside: Having your parents pay for the wedding -- especially if they're retired, on a fixed income, or just not that well off to begin with -- could strap them down with some major debt.

A contemporary and, according to Gregoli, effective way of taking care of wedding expenses is for the two of you, the bride's family, and the groom's family to split the expenses. It works best, she says, if you simply take the whole cost of the wedding and divide it three ways, rather than dole out specific things to pay for: "For example, if you let your parents pay for the dinner, then they may be inclined to invite more guests. It can get sticky." If you can't divide it equally -- say one party is more or less wealthy than the other two -- ask that party what's comfortable for them to give, and throw it into the pot. "But just because his family, for example, is giving four times as much money as yours doesn't mean they get four times more say," says Gregoli. "You're handling this as a group, and one person can't push his or her weight around." The key to making this work, she cautions, is negotiation and compromise.

The Pros:
By pooling your resources, you may be able to afford the kind of wedding you want. You also may not have to empty your savings account to get it. What's more, since everyone is contributing -- which means everyone gets a say -- you're not likely to make one side or the other feel left out.

The Cons:
By accepting money from other people, you do give up some control. But there are always solutions, notes Gregoli. "If you want a DJ but the parents want a band, look for a band that also works with a DJ, who can play during the band's break. Or if you want a buffet reception and your parents want a seated dinner, perhaps have food stations, but arrange for waiters to serve your parents and their friends at assigned tables."

(You Two Pay for Everything)

More the norm than you might think. As more and more brides and grooms marry later -- stockpiling those Christmas bonuses, merit raises, and dividend checks -- more and more couples are in a good position to foot the entire wedding bill themselves.

The Pros:
Money talks, and as such, you will have total control over all aspects of the wedding. If you want to get married in a bikini on the beach and dance to a reggae band at the reception, you do it. Your mom may think it's an outrage, but in the end, she-who-does-not-open-her-wallet can't dictate to you.

The Cons:
You might deplete your savings (and rack up some debt if you take out a loan or charge on your credit card). You also run the risk of offending your parents if you refuse their financial help. To remedy the situation? You might accept a nominal sum from them, or let them pay for something you don't have strong opinions about -- say, the flowers. In any event, don't shut your parents out of the wedding-planning process. Encourage their input -- hey, they may even have a good idea or two -- compromise where you can, and stick to your guns on the things that are really important.

"If anything creates problems in planning a wedding, it's money," says Gregoli. "To sidestep problems, you need to do a lot of communicating -- with your partner and both families. If you don't, there will be trouble." Truer words were never spoken.

Look later this week for the post on how to approach the “Powers to be” on this delicate topic with grace and respect!

Morgan Gallo
Savannah, GA
For 5 years now, we have served destination and local brides with our luxury wedding planning and event design services in Low Country and Savannah, GA area. Our specialty is destination wedding management for professional couples who need a personal assistant to plan their intimate wedding of their dreams. If you need a Savannah wedding planner or event designer, let our team help you achieve all you envisioned and more! www.morgangalloevents.com