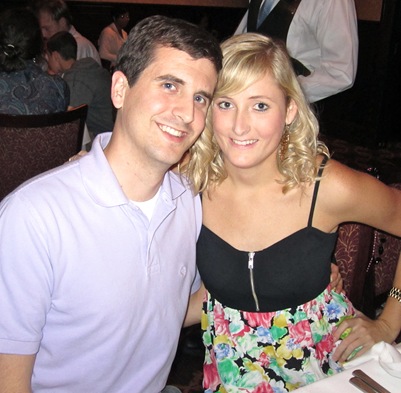 We met through two mutual friends. One of my coworkers was dating (and now they are engaged!) one of Ian's good girl friends from Elon University. The first night we met Ian asked me to be his date at his Christmas party that following week, and my response was only if you will  be my date to my Christmas party the night after yours. So needless to say after the first night  of knowing each other we already had 2 dates planned for the coming week! We actually ended up seeing each other again a few times casually before our technical "first date" and have seen each other almost every day since!

If I had changed my plans one more time on the day of January 7th, we still may not be engaged! That morning I told Ian that I was going to go to an exercise class from 3-4 PM and Ian had told me that he would not be off until 5:30 that afternoon. After a big lunch with my roommate on Friday, I decided I no longer felt like jumping rope for 20 minutes (one of the listed activities that day for the class). Ian proceeded to tell me I was lazy, he knew I was going to slack off and not go today, etc… All the while I thought he was being mean, little did I know it was because I was ruining his plans to enter my apartment while I was at this class. Ian in panic, contacted my roommate for help to think of something else for me to do. I got a text from Mallory asking if I wanted to get manicure's around 3:30 and of course knowing that Ian would be at work for a few more hours I gladly accepted! Randomly turns out that Ian's boss decided to let everyone out at 2 PM, and Ian knowing I do not get out of work until 3 on Friday's immediately called Mallory and said that he was going to come now! Unfortunately for Ian, I decided to leave work early around 2:30, but luckily I called him on my way home to say I just left work and was going to get manicure's with Mallory and would call him after. Ian talked to me the whole 2 mile drive home, which looking back on is pretty out of the ordinary. While talking to me on the phone Ian and Mallory set everything up in record time! Once they were finished laying all of the rose petals down Mallory quickly exited the apartment afraid that I may see her. Two minutes later I walked in the door and immediately saw rose petals on the ground. They started at the door and led to the back of our living room and at the end spelled out "Marry Me?". I was in complete shock! Ian got down on one knee and asked me to marry him and of course I said yes! Then we called both of our parents to let them know the good news. I ended up getting my manicure a little later and then we enjoyed a nice romantic dinner out!

We are getting married on Hilton Head Island, SC. I was born and raised there and my parents still reside on the Island today. Since I graduated high school I have only returned to the Island during breaks or to visit, and have really grown to appreciate the Lowcountry for its natural beauty. There would be no more perfect a place to get married than this! We will marry in First Presbyterian Church, the same Church that I was baptized in when I was just 4 months old!

We both currently reside in Charlotte, NC. Ian works for Apex Systems Inc., an IT staffing firm, as a Specialty Recruiter. I work for The Shaw Group Inc., in their Nuclear Power Group, as an Analyst.

Just that Ian and I are so excited to start planning our wedding with the help of Alysse and Morgan Gallo Events!