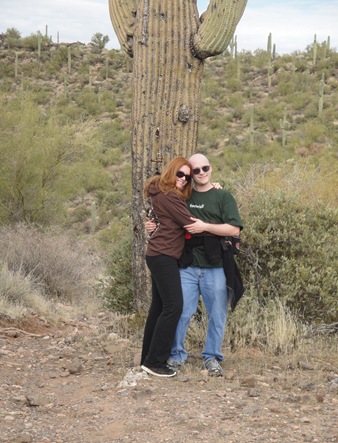 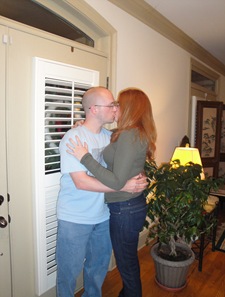 Next to a dark city hall building in the town square of Duluth, Georgia minutes before the New Year. The town was having a celebration in the square with a ball "drop" and country singer Jason Michael Carroll was playing a concert in the background (neither one of us particularly like country music). Just minutes before the New Year, William walked me to the side of Duluth city hall, which was the central point of the celebration, saying we were getting away from the music. It was dark on the side of the building and he told me to look in the window at an ATM (the window was the only source of light on the side of the building). Completely clueless, I looked in and as I was turning around, he presented me with the ring and asked me to marry him. It took a second to process and when all set in a couple of minutes later, the town square crowd was counting down to the New Year and set off fireworks to celebrate 2011! Happily in tears I watched the fireworks as though they were our own personal celebration, then we walked around the festivities in complete bliss. I was on cloud nine...it was perfect!

William is from Atlanta and has a lot of family and friends in the area. I have family all over the country, including in Atlanta, and Savannah was a good mid-point and also a great destination. Everyone has either been there and loved it and wanted to go back or always wanted to go there, so this is a good excuse to do so!

We both love the Fall and the changing leaves, which makes October the perfect time to get married. While many people would prefer getting married in San Diego, we wanted a destination wedding with actual seasons where we could really play up the Fall atmosphere. Also, it feels more romantic and adventurous to have a destination wedding somewhere other than the area we see every day.

Never been happier in our lives and really looking forward to the wedding and the help of our planner to make it all happen!