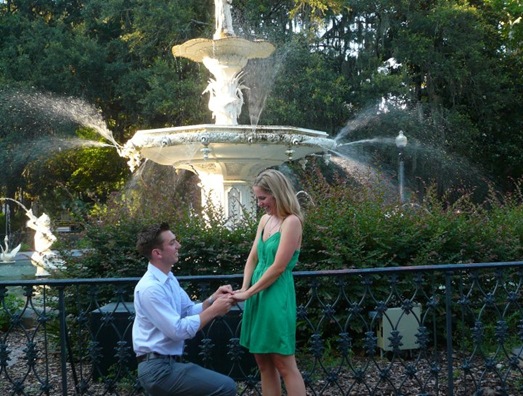 We grew up in the same hometown and went to the same high school. We weren't friends until my senior year when Kenny came back home for a visit from West Point. It was Valentine's Day weekend and we both got snowed in at a mutual friends house. I remember being very impressed that he was wearing real leather shoes, unlike the gross old tennis shoes I was used to boys my age wearing haha. We became friends and a long distance relationship formed quickly..

A week and a half before Kenny's 2nd deployment to Iraq, we were walking through Forsyth Park on our way to dinner, as we had done many times before. Kenny was sweating bullets and looked like he was going to pass out! I asked him if everything was ok as he stopped me in front of the fountain. He got down on one knee and asked me to marry him! He even had a friend from work hiding in the bushes taking pictures of the moment!!

We lived in Savannah for 3 years together until Kenny left in July. There is no where else that makes us quite as happy as this beautiful city does. It was never a question if we would get married here.

I live up in DC (where we are from) and now that Kenny is back from Iraq, he is in Savannah until July.

After 8 1/2 years together, separate colleges, 2 deployments, and 5 moves... we are ecstatic and the thought of FINALLY being married!

We are so thrilled to be sharing in one of the most memorable times in your lives!