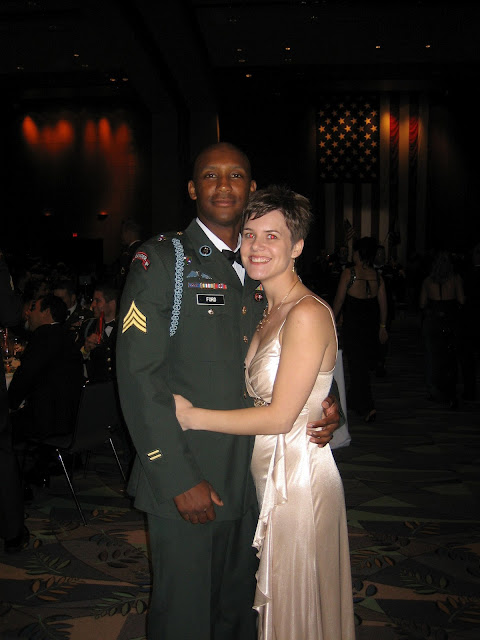 Where did you meet?
We met at the ATM in City Market.

How did he propose?
The first time Kavon said he wanted to marry me was in a letter he wrote me during the 4.5 months he was in Ranger School. We met in February 2006 and in August 2006 he wrote "to be flat out honest, maybe I should save this for in person, but what the hell, I have to be honest, I really don't know how much I have to MARRY you!" He meant he didn't know if he had the money to marry me. This was the first time he said he wanted to get married. Most of the letters I received from him then talked about spending our lives together. Being apart for so long made us realize how much we really meant to each other. Two weeks after completing Ranger School on October 12, 2006, as I turned around ready to go to Chocoholic Frolic, he made it official and asked me to marry him in person. The next day we went to the courthouse and got married, since we didn't have the money or time for a wedding.

Why did you pick the area you are getting married in?
We met in Savannah and lived there for our first couple years of marriage.  We consider Savannah our true home.

Where do you reside now?
Raleigh, NC

He's actually my husband already.  We never got to have a wedding, which is why we're doing it 6 years later!

We are so very honored that you want us to share in your day. The love that you two share and the heartfelt story about your journey together up until now is so amazing. We cannot wait for the big day and thank you both for your service to our country!
XOXO
The MGE Team