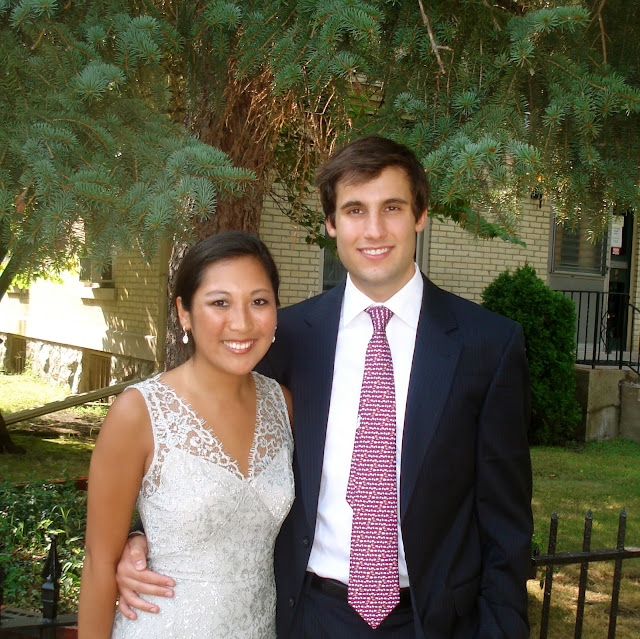 Where did you meet?
Chicago, at a Mexican restaurant where we went out to dinner with our mutual friends

How did he propose?
After weeks of sneaking around and acting strangely, I suspected something was up.  I relayed my suspicions to my best friend (and now maid of honor), and she was trying to throw me off the trail since she was secretly in cahoots with Mike.  We were on our way to Savannah for our two year anniversary and I had a feeling it might be that weekend.  We entered our hotel room and it was covered in rose petals with strawberries and champagne, and he got down on one knee and proposed!  I immediately started sobbing, and somehow choked out a yes.  He received my father's permission a week before and gave me his grandmother's diamond he had reset.  We spent the next hour calling family and friends and drinking champagne.  We spent the rest of the weekend celebrating around Savannah and Tybee Island.

Why did you pick the area you are getting married in?
We wanted a place that was significant to us, and Savannah was perfect since it was where we got engaged.  We are still looking for a venue!

Where do you reside now?
Atlanta

Anything interesting or out of the ordinary you are including in yourwedding day?
We haven't figured out a lot of the fun details yet.  But, I was a History major and I have remained a huge history nerd.  Therefore, we would like the past to be an important theme throughout our wedding.  Instead of just the usual table numbers 1-10, we are going to name the tables after specific years and have pictures of us from the corresponding year.  For example, Table 1986 will have our baby pictures, Table 1996 will have a picture of me with my failed attempt of a bob haircut with bangs, and so on...