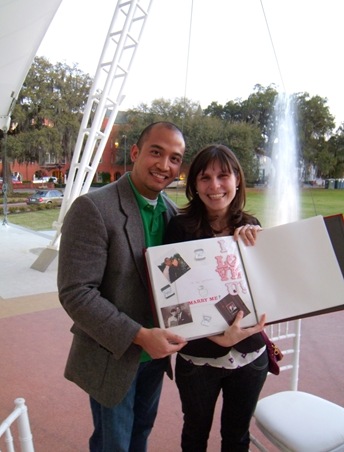 While Juliet and I both work at the same law firm, we didn’t actually meet at work. Instead, we first met while playing on our firm softball team. Juliet played second base, and I played shortstop. While I didn’t realize it at the time, apparently, during our first game, Juliet became so frustrated after I would step in front of her to field grounders (BTW, I still stand firm on my position that this is the proper baseball play) that she even threatened our “manager” to never play again if I was going to continue to play shortstop. However, after the game, the team hung out at a pub for dinner and drinks; we got to talking; and she realized that I wasn’t as bad as she first thought. For my part, I agreed to play left field from that point on.

In the novel “A Moveable Feast,” in response to a daytrip gone all wrong with F. Scott Fitzgerald, Ernest Hemingway’s wife Hadley asked Hemingway, “But didn’t you have any fun or learn anything?” Hemingway replied, “I learned one thing.” “What?,” she asked. “Never to go on trips with anyone you do not love.”

In the Fall of 2008, after Juliet and I had been dating each other for only a few months, we decided to take our first trip together to Hilton Head with another couple, knowing full well that our ability to travel together would be a good indicator of where things stood in our relationship. During that trip we drove down to Savannah for a day and completely fell in love with the city. I remember distinctly a moment while walking in Forsyth Park, when we both looked at each other and I said something to Juliet that turned out to be exactly what she was thinking at that very same moment. We both laughed till it hurt. It was at that seminal moment when we both realized that whatever was going on between us might turn into something serious. In fact, it was at that moment when I first thought to myself, “I could fall in love with this girl.”

After that daytrip, we promised each other that we would return to Savannah again. When we finally returned to Savannah last spring, I asked Juliet to marry me. Since there have already been two very important moments in our relationship where the city of Savannah has played a special role, we decided that Savannah would be the perfect place for our destination wedding. In addition, I love that Savannah is such a timeless and romantic place. I’d like to think that Juliet and I can come back to Savannah for our five year, our ten year, and (God willing) our fifty year anniversary, and not much will have changed since our first trip when we first fell in love. There’s something about that thought that makes me smile.

How did you propose?
I planned a trip to Savannah for Juliet’s birthday, which happens to be on March 17th -- St. Patrick’s Day. Since St. Patrick’s Day in Savannah is the second largest St. Patty’s Day party in America (second only to New York City), I figured that Juliet would think we were just going to Savannah for her birthday and the parade, and not for a proposal. I knew that I wanted to propose in Forsyth Park (see above answer), and I had an idea about how and when I would do it, but I also knew that I would need help. I decided to contact MGE to see if they could help me with the proposal, and they agreed!

Since Juliet really wanted to try the cooking school at the Mansion at Forsyth Park (which we both highly recommend), I made reservations for the cooking school for our first night in Savannah (the day before Juliet’s birthday). Chef Darin was great and helped the whole group cook an incredible Southern feast. As we were just about to sit down with the group to eat dinner, Chef Darin announced that alternate plans were made for the two of us to eat dinner in a separate location. A server from 700 Drayton, the restaurant located in the Mansion, came down, grabbed our dinner, and led us into a private dining room where we ate our meal. At the end of our meal, the server reappeared to let us know that arrangements had been made for us to have dessert outside. I led Juliet outside, and when she asked where we were having dessert, I pointed across the street to the Forsyth Park Bandshell, a beautiful new concert venue with fountains and lighting, where a small table was set up with our dessert, flowers and an album placed on it. Just a few feet from there was a woman playing violin. The album was a scrapbook that Juliet had given to me as part of a birthday gift a year before -- she had filled the album with pictures, ticket stubs, brochures and memorabilia from all the things we had done and places we had visited during our time together. At the end of the album, Juliet placed a card with “To Be Continued...” written on the envelope -- it contained tickets to a concert in NYC for one of my favorite bands. For the proposal, I decided to take the album, and add more pictures and memorabilia to bring the album up to date. At the end of the album, I placed the “To Be Continued...” envelope on the last page and wrote “Will You Marry Me?” beneath it. At that point, I got down on one knee and proposed. As an added surprise, Alysse at MGE was in the distance taking photos of the engagement the entire time. Thanks to Alysse for helping the proposal go so smoothly!

We will be getting married at the Bandshell at Forsyth Park -- the exact same place where I asked Juliet to marry me -- with the cocktail hour outside on Reynolds Square and the reception at The Olde Pink House. In addition, instead of having a traditional wedding cake, Juliet and I decided to have a dessert table with various pies (pecan, keylime, and peach) made by The Olde Pink House and banana pudding, cookies, brownies and cupcakes provided by Back in the Day Bakery http://www.backinthedaybakery.com/, as well as passed Praline baskets and passed cookies with shots of milk. Last, although we are having a destination wedding in Savannah, Juliet and I decided that we still wanted to include something uniquely Cleveland in our wedding, so we asked a talented, local artist from Cleveland, who works under the label “Grey Cardigan,” to design our Save the Dates, shower invitations, welcome dinner invites and wedding invitations http://www.greycardigan.net/. We just love the retro, whimsical and fun feel of his artwork, and the invitations turned out great!!

No words to even begin to tell you how meaningful these two are to us. It is VERY rare that we have the privilege of being there from the very beginning of the journey a couple travels when getting married. To share in planning the proposal to now planning the wedding of their dreams, we are overjoyed to share in this with you two!